Did you know Microsoft has a phone? No - seriously - they do. Ok, all kidding aside, I've been wanting to take a look at a Windows Phone for some time now. I've encountered a grand total of one person actually using it - but that person raved about it. A few weeks back one of my readers (Jason Haag) offered to send me his phone and let me play with it. I didn't get a long time with the hardware, but it was an interesting experience and I thought I'd share a few thoughts. As always, I'm very curious to see what others think.

First off - the phone itself was a decent enough model. I didn't have a SIM card in it (do people actually make calls on phones anymore?) but I used it in my office over WiFi and got a chance to play with the device. The speed seemed decent enough and the screen was fine.

The UI (named Metro) is fascinating though. Maybe I'm just intrigued because it's a non-iOS/non-Android device, but I absolutely love the "box" look. 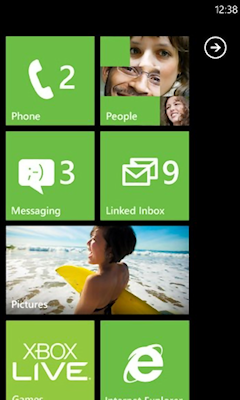 While I absolutely love my iPad, the main thing I find lacking in iOS devices are widgets. I may not be the "normal" user, but I spend a lot of time with my devices around me. My Android devices run widgets that I catch myself constantly checking for updates. They almost act like extensions to my screen space. In that regard then iOS is a bit boring. The Metro UI is a bit like widgets taken to the extreme and I just really dug it.

It took maybe 5 or so minutes for me to grok how things work on the phone. The most confusing aspect was simply recognizing when I needed to swipe left and right to get more options. There are visual cues on top of the UI that are obvious once you notice them, but at first I wasn't prepared for that metaphor.

App wise the collection is a bit spare. I looked for Evernote and Dropbox, two apps I live and die by, and only found a native app for Evernote. I assume Dropbox will come eventually. To be honest, I don't actually care how huge one market is compared to another. As long as a few of my core apps are covered, I'm ok.

I spent a few minutes testing out PhoneGap support (see the Getting Started guide), and didn't have any issues. You can download the Express edition of Visual Studio for free and the emulator worked decently enough. (But let's be honest, the Android emulator doesn't really set the bar high.) Unfortunately, and like Apple, you can't push out to a real device unless you pay for a developer account. I'm not opposed to that, and it's not too expensive either, but it does bother me when I'm blocked from putting what I want on my own device. (Err, my borrowed device. ;)

What makes me most excited though are Windows tablets - specifically those that will make use of Metro. There's been some great coverage lately (including a public preview) and I think Microsoft is doing some great work. I'm not too sure how well Metro will work on the desktop, but it looks like it will be easy enough to bypass for power users. I can say that I'll definitely be purchasing a Windows tablet this year. My only concern is that I hope the first crop of offerings are not as poor as the first generation of Android tablets. I'd like to imagine that vendors would be smart enough to not send sloppy incomplete devices to market, but obviously that may be hoping for too much.