Updated September 3, 2012: As just an FYI, since I wrote this post Parse launched a JavaScript API. I'd recommend using that instead of the REST-based API if you are using JavaScript. You can still use the REST-based API, but using their JS API let's you skip some of the authorization issues I had below.

During the Christmas break, I had the chance to look at, and play with, Parse. While you can check the site for the marketing description, the basic idea behind the service is a way to store data for mobile applications without the need for a server. I played with their API and was incredibly impressed by what I saw. Here's why you should consider them:

Parse has full SDKs for Android and iOS, but even better, they've got a URL based API. You can use this API to create, update, delete, and search your data.

Just to reiterate to make sure this is clear - your mobile applications can make use of a dynamic database without any setup on your web server. Just sign up, get your keys, and get cranking.

Even better, they provide some real good benefits on top of what I already said.

First - any objects you create will have metadata (date+ID) added to them automatically. Yeah you could do that yourself, but it's a handy addition.

Second - they have special support for users. Basically, they recognize that user objects are probably something almost every application has, so they go out of their way to handle them better and make it part of your model.

Third - they also support geolocation searches. I'm not sure how often I'd use this, but if you tag data with a location, they make it trivial to later search for objects within a certain range. I've done this manually a few times in SQL and I can tell you - it's not fun. (Even when cutting and pasting a solution.)

Four - they have a nice web based data browser. This allows you to do some basic CRUD type operations and is real useful while testing:

You can read more about their REST API here. I decided to give their API a try with PhoneGap and jQuery. While Parse is a paid service, they do offer a free version in their pricing plans.

Hitting their API with jQuery proved to be a bit difficult. You need to include a username and password (which corresponds with two of your keys). That parts easy enough if you use $.ajax. What proved more difficult was the Authorization header. This header needs to be the combination of the username/password strings and has to be Base64 encoded.

I found a JavaScript library for this here: http://www.webtoolkit.info/javascript-base64.html.

This worked, but I also discovered that some modern browsers include it natively via window.btoa. I combined this with a blog post by Bruce Kroez to come up with this method:

I believe, stress, believe, window.btoa may not work in iOS. If so, switch to the JavaScript library version listed above. So given that, a basic hit to Parse via jQuery could look like so:

In this case, I'm adding an object by doing a POST. Notice how I can just make a note object, serialize it, and send it. I love that. You get a JSON object back containing the ID of the new object. How about listing objects?

Note that the significant change here was from POST to GET. It's as simple as that. I can then loop over my results and display them how I choose. Note that they support both pagination and getting the total number of results too.

So, how about an application? I wrote a super simple application that let's me add an object by clicking a button and then generate a list. It isn't dynamic at all, but demonstrates the API. jQuery supports an ajaxSetup function which lets me default a lot of the stuff you saw above. First, I built up a super simple HTML page:

And then whipped up this JavaScript: 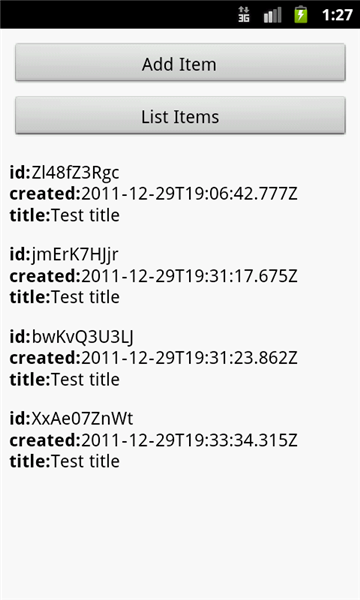 As I said, I think this is an incredibly impressive service. The only negative I can see so far is that it seems a bit slow, but, I only tested with the Android Emulator, and that tends to make everything look a bit slow. I've yet to test it on a real device over WiFi yet.

Also - note that their REST API will also work great with your server applications. Now, I know I just said you don't need a server, but if you want to offload data storage and traffic to Parse, you can use another server to handle things like reporting or management. I tried calling Parse via ColdFusion and it worked well.

Now this is *exactly* what I've been looking for for my mobile apps :)
Thanks Ray!

I should add - if anyone wants my PhoneGap app, just let me know. I figured it was too trivial to actually share. I see I included my keys in the code above, so, um, that's bad, but it's a demo app, and the company knows about my blog post, so I'm not going to fret about it.

I'd like to see the PhoneGap app if you don't mind! We get a ton of requests from PhoneGap and Appcelerator users for Parse integration and maybe you'd let us use your app as an example?

Oh can you remove my email address from that last comment? :-) Thanks!

You can download a zip of the Eclipse project here:

The APK is in the bin folder. In theory, you can add this to your Eclipse install and run it.

p.s. Will remove your email addy from the comment in a sec.

If I get time, I'll try to finish my app and turn it into a real mini Notes type app.

Ray,
I get 404 when trying to download the parse.zip. Is it no longer there? If you can make available, I'd greatly appreciate it!

oops, change that to parsedemo.zip.

Ray,
When I try to run a similar app, it gives me problems with trying to call the REST api at Parse because I'm trying to run on a local web server to debug. Did you run into anything similar?

*Note, I'm using a real objectId in my code, just don't want to post on here.

That's normal - it's your browser not letting you do a network request to another domain. Some APIs support JSON/P, which is a 'cheat' way around it, but I do not _think_ Parse.com does. You could hit ColdFusion on your local server and have it proxy the request (or PHP, Ruby, etc).

In my testing, I never ran it as a file on my own server. (Well, I did for my ColdFusion test, but that wasn't Ajax.)

Ray,
Sigh... this is frustrating for sure. When you created your phone gap app, you were running it on a web server, not locally? I suppose I could use dropbox or something as a cheat for a remote host. Hmmm;

Ah, you have a fundamental misunderstanding of PhoneGap here. PhoneGap packages your HTML/JS/CSS up into a native application. It runs your HTML - much like you can run HTML by just double clicking on an HTML file on your desktop. However, PhoneGap HTML apps are NOT restricted in the same ways traditional HTML apps are. So for example, I can do an Ajax request to _any_ domain. It just plain works.

Does that distinction make sense?

Is it time for me to give a PhoneGap preso over Google+ Hangouts? :)

Ray,
I tried running this on Apache on my local box (using the built in Apache instance on mac) and that didn't work. Why would CF running locally work any better (just curious). The problem is, when I run this in iOS/Android emulator, the Parse calls fail for apparently the same reason. I'm interested to know more about how you developed your app without running into this. Thanks!

I think we are still misunderstanding each other.

You can't run my main code above on your web server. It just won't work because of the remote XHR call.

Does that make sense?

Now- when you run this in Android, it _should_ work fine. I've never had issues doing a HTTP call to remove servers. If you could send me your APK, I could take a look.

My fault for not being clear... I've not run your code, nor tried to. I was referring to my creation of code similar to that shared in the above article.

The article above mentions using AJAX to call the Parse API methods.Your parse demo is entirely html/js, right? At least, the part you made available to download was. So I was wondering how you got an html/jQuery mobile app using Ajax calls to Parse to work in a browser/emulator, etc. Does that make sense?

Perhaps it only works on the physical device. That would really suck and impede one from seriously using Parse.com services in an app. Maybe I'm missing something - it's been known to happen :)

I didn't use the browser at all. I used either real hardware, or the Android emulator.

Hi Ray,
Great code! Thanks for your contribution!
I am trying to hit the logging in functionality of Parse using $.ajax (i have already created 2 users via curl) but with no success. Here is sth i tried.

Could u be of any help?

The data argument, afaik, should be _one_ object, not multiple keys as you had it there. I'd change it to:

I am very interested in using a similar setup as you for my mobile app. I am somewhat new to this and might have an unclear understand of how you app works but say I had a string that stored a comma delimited list of ids. Is there a way I could parse this server-side to create a string array without needing the phone to handle it?

I'm confused. You say you don't want to use the Phone to handle parsing a string. But if you are building a phone app, and parsing strings is simple, why would you send it to the server? Having JavaScript split a string is easy - just use the split() method of strings.

makes sense, I think I had a misunderstanding of how to optimize my mobile app to take try and meet tighter processing and network traffic constraints

By the way - for folks who subscribed to the comment feed back in January, Parse.com has added a crap load of features since then.

I am currently trying to hit the API and I had it working however for some reason it is now failing on me, wonder if there is something you can see that would keep it from working? ****The current approach works on a desktop browser but not on the phone.

Seems ok to me - although I'd probably put it in my onDeviceReady handler. I typically do not do _anything_ till then. You may want to try console debugging as well.

As just a general FYI to everyone here - note that Parse.com's new JS api makes this stuff even easier. I'm hoping to do an updated blog post sometime this month.

And how to store these object to local app storage ? and then view it offline ? thanks