This morning I read a post on the Phonegap Google group asking about their support for orientation changes. While PhoneGap has good event support it doesn't support orientation changes. Why? Because there is no need - turns out the mobile browsers support this themselves. It is probably a good idea to remember that your mobile browsers can do quite a bit themselves. If you find something missing from PhoneGap that you think should be included, ensure the browsers just don't support it already. (And if not, check out the excellent list of plugins.)

I did a quick Google and found that both Safari and Android support a simple orientation change event listener. With that I whipped up a quick PhoneGap application. I began with a super simple front end:

And my code is then just:

And here is a quick screen shot of it in action. 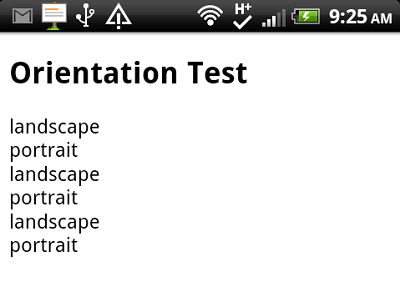 p.s. Recently I mentioned a plugin that significantly improves the experience of creating PhoneGap applications in Eclipse. I began having issues with orientation changes crashing the application. On a whim I decided to check and see if a new version of the plugin existed and indeed there was. Updating fixed everything. I still wish the plugin had a way to output an empty HTML file but it's much easier than building things out by hand.

According this post (http://www.matthewgifford.c..., it's not that straightforward. The values for window.orientation are not really standardized.

Fair point. I'll mention that PhoneGap has a Device API though. You could use that to sniff the appropriate OS and ensure you correctly handle the values.

My previous post was not a slight towards you or your post. It's just that I am experiencing this exact problem at the moment and wanted to bring more clarity to the issue.

Keep up the good work.

Cesidio - didn't take it as a slight at all. :) The devil is in the details, right? Thank you for bringing this up. It is easy to deal with, but I didn't know this was a problem until you talked about it.

Great blog as always, I do enjoy reading your content regarding phonegap!!

It's always great to see a working example.

Basically I am trying to fix a android reflow bug that happens on device orientation change any element that is a position:fixed; and width:100%; it doesnt get resized when the device changes orientation, so I tried your code above and this doesnt work, I don't even get any console output and the event isnt firing (using samsung tab2, android 4.2.2)

I was wondering whether its possible to watch the window or document resize then i could just resize my fixed element when this happens, but I was wondering if there was a better approach.

Sorry for the delay in responding. I'm not aware of any bug with orientation and Android, so maybe it is just an issue on the tab? You could certainly *try* the resize idea. Maybe look at responsive CSS too.

In the end I used jquery to watch for orientationchange and then hide and show the navigation fixed element, this then fixed the problem.

// first of all I only fired this function for the android platform
$(window).bind('orientationchange', function(e) {
$('nav').hide().slideDown();
});

Hmm. But this is the *same* code I used. The only difference is you used jQuery. :)

Hi! I think I have another problem because my Phonegap App does not rotate at all! I'm searching for a solution because it doesn't rotate on the Android Simulator nor the Android Smartphone itself.

It's really an automatic function in the recents versions? Or needs to be declared?
Thanks and great blog!

Check your config.xml, are you locking orientation? http://cordova.apache.org/d...

in fact, there was NOT a lock in config.xml, but because of your comment I checked the AndroidManifest and there it was a "force portrait" tag!!! hahahaha

no wonder why you are where you are!
thanks

Hey, can i get the link of 'main.js' which is included in this code !

Sorry I don't have the file anymore - but you can literally just cut and paste the code above. (I cleaned up the formatting a bit.)