A week or so ago Steve Bryant suggested that August 1st be a day for us in the community to share how we got started in ColdFusion. I thought this was a really cool idea and I hope everyone takes the chance to participate. If any of my readers do not have a blog, I welcome you to share your story in the comments below.

I began my college career in 1991 studying computer science. However, after a year or two I found myself dissatisfied with what I was learning (and finding that my 'good at math' skills hit a brick wall with Calculus 3). I switched to English and found myself (and my grades) much improved. I couldn't escape my love of computers though and stayed very involved with what was the beginning of the web. I remember surfing via Mosaic back when Yahoo was king. When I found that I could create web pages myself, I found my new passion. I got even more excited when I discovered dynamic web pages. If I remember right, the first dynamic web site I saw was a Tarot reading. The web page took what seemed like 5 minutes to load, but I must have reloaded it ten times. I was fascinated by the random results. 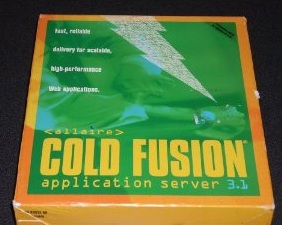 I learned that people were using Perl scripting to write CGI scripts. Perl was (probably still is) easy to pick up and it didn't take me long to learn how to build simple CGI scripts to handle forms. I decided to leave grad school (I only went for one semester) to join one of the two big web shops in town, Einstein Digital Media. I did a bit of HTML design (yes, I did design, shudder now) but mainly I was writing gobs and gobs of Perl scripts. This worked fine for a while until we got a client that had an existing database I needed to hook into. I knew Perl could do it, but I wasn't excited about figuring it out. At that point, ColdFusion was in version 3, and I heard it made database interactions easy. I downloaded it in the morning and by lunch I had a basic prototype done. I was stunned. I remember being very impressed with how easy it was to generate HTML via ColdFusion. What had been a pain in Perl was easy in ColdFusion. Most of all - it felt like ColdFusion was built for the web, which is not something I got from Perl. While I would continue to work in Perl from time to time, that was the beginning of my love affair of ColdFusion and the beginning of a long (and successful!) relationship.

Two of my oldest ColdFusion sites are still around - Death Clock (which I sold about 5 or so years ago) ran on Access, yes Access, and at the time I had it would get 3-4 million hits per month. My other really old site is a T.S. Eliot site, What the Thunder Said. You can also find some of my old custom tags on the Adobe tag gallery - there is some scary old stuff there.