I finally got my hands on an iPad2 (yes, the new job has perks) and today I decided to test out building a Flex Mobile application to the device. Others have described the steps in detail so I won't repeat that here, but I'll share how it went for me.

First off - I signed up for the iOS Developer Program this morning. Oddly I had to use a whole new login since my last login was tied to my Broadchoice job from a few years back. I saw nothing in the UI about changing your organization. I used it as an opportunity to dump my Google Apps email login and just switch to a new account. I did this around 10 or so this morning and it was done by 2. I had heard 24-48 hours so I was pretty surprised.

Next - I read Holly's blog post here: Flex/AIR for iOS Development Process Explained!. She does a darn good job. I still had a bit of confusion in some place but to be honest I skipped all the tutorials on Apple's site and I tend to skim as well. The biggest I issue I had was in creating a p12 file. Flash Builder will actually link you to a page that talks about it but I found that page to not be helpful at all. Instead this article - Using Flash Builder 4.5 to package applications for Apple iOS devices - helped me get over that hump.

Then I simply exported a release build. This process takes a few minutes on Windows, but once done you have an IPA file. Drag that into iTunes and voila - it works. 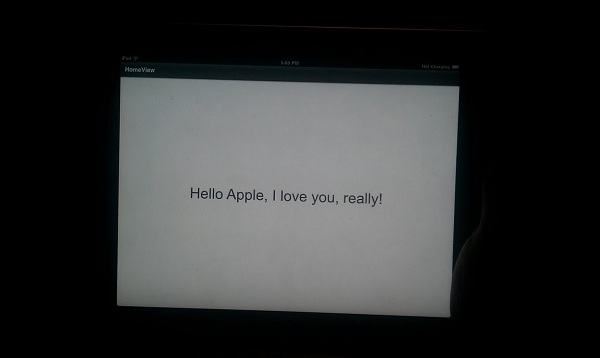 Sorry for the awful pictures, but I mainly wanted to prove that it does indeed work. All in all the process took me about an hour. Next time will be significantly shorter now that I know what I'm doing.

Little clarification. You can dev on Windows, no problem.
But to upload the final binary to the AppStore, you will need a Mac. Or at least a Snow Leopard VM that has Application Uploader on it. That's the only step where you need a Mac system.

That seems dumb. I've got a Mac desktop, bit old, but it's got SL on it I believe. To be honest, I don't know if any of my apps are iPad ready. I'd kind of like to put Hangman there.

Was this supports all ios version of iPhone or available only above iOS 4.0?

@jfrobishow no, the only workaround is a mac VM. Apple made it that way like a yea ago already.
Supports iOS 4 and superior

Correction, you don't need a Mac to upload the final binary, you need the Mac OS X. I've known a number of people who handle this final step by running OS X in virtualization, using VMWare on a Windows machine.

Thanks for that clarification Matt!