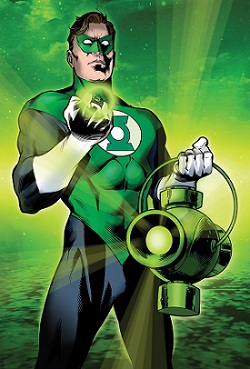 I just got out of seeing Green Lantern with my boys. (My eldest loved it. Said it was the best film he had seen all year.) I have to say - despite all the negative reviews I heard - I really enjoyed it. It was early in the film when I figured out exactly why. Movies like Iron Man and Thor - and I assume Captain America to come - are all "Films based on Comics." That's great. But Green Lantern felt like a "Comic Book Movie." When you spend the first five minutes or so deep into cosmology and aliens you're in an entirely different world than what you get with Iron Man. Shoot, even with Asgard in Thor, Green Lantern just felt a lot more 'comicy'. (Yes, I'm creating that word. I own it and will be charging royalties.) Green Lantern is far from perfect. A lot of the romance felt like - well - comic book romance. It also spends a surprisingly large amount of time away from the main character. That being said, I really enjoyed it. I was never a Green Lantern reader so I can't comment on how well it pays homage to the comic. I can say I'm considering picking up the comic - especially with DC about to reset everything in a month or so.

So - what did folks think? (And please - try to keep it spoiler free!)

Took my 9yr old daughter to see it last night. I have been slowly introducing her to the world of Marvel and DC. She has ordered them as: 1. Thor, 2. X:Men:First Class, 3. Green Lantern. That said we both enjoyed ourselves ... now getting a copy of Green Lantern: Emerald Knights

"I can say I'm considering picking up the comic - especially with DC about to reset everything in a month or so."

+1 ... For me, it'll likely be on my Android phone via http://www.comixology.com

I'm looking forward to seeing the film. Thanks for keeping out any spoilers! :-)

Wife treated me to VIP seating at Loews last night for Father's day. I enjoyed it for what it was because I understand that no matter what, the movie industry is going to take liberties here and there and do what they want.

Haven't seen it yet, Ray, but dude... it has Ryan Reynolds -- it's bound to be full of awesome sauce!

My wife met him about a year or so and said he was a nice guy in person. I like him as an actor. Thought he was the best thing in the Wolverine movie.

I enjoyed it with my Dad on fathers day. Only complaint I might have is I think it could have been a bit longer.

I have not seen yet but would like to see it after reading this comments!!