Back in December I created a quick survey looking for reader feedback. I just wanted to thank everyone who took the time to respond. I had 152 responses and a lot of good feedback. My questions focused on the following topics.

When do you read my blog? 59% of you said when something interests me. 39% said all the time. 2% said pretty rarely. This falls in line with what I expected. I don't read every blog entry of any blog so this is cool.

Lately I think I read your blog 56% of you said about the same. 31% said more often. 13% said less often. The reason behind this question was due to a drop in hits in 2011 over 2011. Probably not a big deal - but I kinda panicked when I saw the stats. I wanted to see if people were leaving in droves and it's good to see this isn't the case. Anecdotal evidence from other folks suggest blog traffic is down across the board.

By the way - before I go any further - Google Docs - which I used for the survey - did a darn good job of reporting on the above. here is a screen shot. 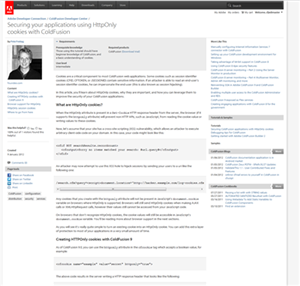 I then asked what folks wanted to see more blog entries on. I took notes and tried to summarize things down to keywords. Here are my notes. Anytime you see a + it implies an additional request.

No big surprises there - especially on the jQuery and mobile said. I was a bit surprised by the requests for more 'best practices' posts. It's something I'll keep in mind. Those types of posts can be difficult. It is ... not dangerous... but worrisome when you post "Do X" since many people will read it as "Always Do X", which just doesn't work in the real world.

On the flip side, here is a list of what folks wanted less of - and yep - you will see a few repeats of stuff above. Many people said they didn't want to answer this question. They felt it was my blog and if a topic didn't interest them, they just ignored it. I also had some people mention my video game reviews. While I don't plan on stopping those reviews, I do try to keep them to the weekend so they are easier to ignore.

Sorry Paris - looks like I won't be blogging about you any more. Finally, I wanted to address some specific comments.

One reader wished for more simple blog entries, like seen on the old ColdFusion Cookbook site. I ran this site for years but after careful consideration, and the launch of the new Adobe Cookbooks site, decided it was best to shut it down. I think the Adobe site does a good job with the content and is much more frequently updated. If you haven't checked it out yet please take some time to peruse the content. There is really good stuff there.

Another reader said, "Would be great to have a "request a blog" feature with some kind of up voting mechanism so we could ask for a particular topic." While I don't have a voting system, I will remind folks about the contact page. Most of my blog content comes from questions sent to it.

Another comment: "This is by no means a critique since I am fully aware there are more than 1 way to skin a cat, but I read your blog less now because most of your ColdFusion solutions involve more script based solutions rather than tag based and since I do not write script, it appeals less to me." Now this was truly interesting. I've been using script based CFCs in almost every blog entry since ColdFusion 9 came out. I love writing my CFCs in script. But I know that it has confused some readers. I once had a commenter suggest that the code I had written was JavaScript, not ColdFusion. I hope that my readers understand that script based CFCs are an optional way to write code and are not the only way. I almost always write my blog entries for the "latest version of CF at that time" but the techniques can - generally - be applied to older versions as well. If anyone else feels like the use of script based CFCs is a bit confusing - I'll try to keep it in mind for the future.

A final comment. This is from one the results and I agree 100%:

"You've attracted a wonderful community of readers and commenters that enhance every already-informative and interesting post..."