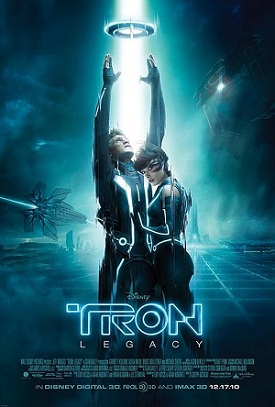 It’s rather late - but my eldest boy is keeping me up so we can see the eclipse in another hour so I figured I’d do a quick write up of my thoughts on Tron Legacy. Everything above the word SPOILER will be spoiler free. Anything below, including comments, should be considered free reign for anything folks want to say.

There are a few movies from my youth that hold a warm spot in my heart. Star Wars (and Empire and Jedi of course) are one of them obviously. Tron is another. In fact, I’d probably say Tron had the biggest impact on me as a young computer programmer. Tron came out in 1982. I was 9 then and to be honest - I don’t remember if I had even used a computer at that point. But I remember being in awe of the special effects and even more so - at the idea of a living, breathing world inside of computers. I know that when I did begin to program (Apple IIe FTW!) that the idea of my programs being actual living creatures was always there in my mind. All thanks to Tron of course. Tron was one of those magical films of my youth. I had no expectations that Tron Legacy would be magical. Computers aren’t a brave new world for kids today. My own kids are living in a house where our phones have more power than I had until college. Right now my eldest is next to me on an older Macbook Pro while I type on a laptop and another desktop is about 10 feet away. My wife’s laptop is nearby as well. That’s 4 machines in this room alone. I certainly don’t think anything is wrong with that - but a lot of the magic of the original Tron is something that can’t quite be recreated today.

So with that in mind, my hopes were simple. Let me see what transpired in the world of Tron and let me be impressed by the visual design and effects. As cool as Tron was in terms of CGI, a lot of the iconic designs are what impress me today. Take the Recognizer: 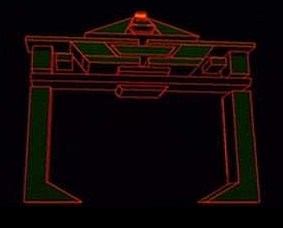 Pretty simplistic - but I remember being in awe of them on the big screen and they still look menacing to me today. The entire movie was full of design choices that just… felt right. And this is where Tron Legacy succeeds well. Obviously the effects are top notch. But frankly, we live in a world where crap SyFy shows have more than passable decent CGI. Tron Legacy does a good job by both being impressive and imaginative. The updated Recognizer reminds me of comparing Windows 7 to 95. You can see a similar hand in the creation of both but the newer model is quite a bit shiner.

The story is full of many nods to the past. When Sam first returns to his father’s arcade and turns on the power - the wave of nostalgia was overwhelming. I love my XBox 360. But growing up I spent a heck of a lot of time in arcades. The “wall of sound” you experience surrounded by a hundred or so arcade machines is just not something you experience now. The movie captured it perfectly. Unfortunately it will probably mean nothing to most kids today. The actual plot - and I don’t think it’s a spoiler to say that most of it occurs in the digital world - is a bit muddled at times. This is a show about the visuals above all else. But there was certainly as much depth as Avatar and most other films. This is no “Inception”, but there was enough of a narrative to keep me interested in between the hyper-kinetic action scenes.

And let’s not kid around. I can remember the first time I saw the light cycle scene in the original film. The new light cycle scene is damn good. It’s not just ‘prettier’. It’s like moving from 2D to 3D (literally in terms of game play for the characters). The action scenes in Tron Legacy are both high paced and just darn plain cool looking.

All in all - I enjoyed Tron Legacy. Will it be as good for folks who don’t have quite have such fond memories of the original? Probably not. But even then it’s worth seeing on the big screen. (I can only comment on the 2D showing though. Frankly I’m sick and tired of this 3D bull crap and I’m going to do my best to not put any more money into a 3D showing if I can help it.) I’d recommend seeing it - but if you’ve not yet made time to ever watch the original, do try to do so first. It will add quite a bit of context and make for a more complete viewing.

Ok, stop reading now if you want to avoid spoilers….

A few things in no particular order.