Last night a reader of mine wrote with an interesting issue. His error handler was firing off quite a few emails (this would help!) but the error wasn't quite clear. I've recreated the error below and I'll explain how I went about diagnosing it. The short summary is that - once again - ColdFusion's ancient automatic form checker was the culprit, which luckily is easy to get around in ColdFusion 9. But first - let's look at the errors that were generated.

Ok, first - here is a snapshot of what the error looked like: 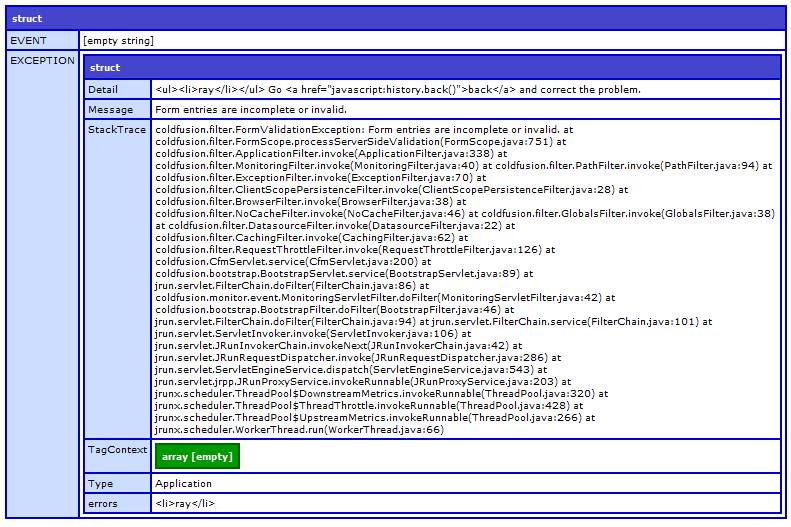 When I saw this, I immediately noticed that both the Message and the StackTrace talked about form validation. This was my first clue that something with ColdFusion's built in form validation was being triggered. You can read about this feature here. For the most part, no one uses this nor do they even think about it until they accidentally name a field something_required and accidentally trigger it.

Now I asked the developer if he had anything named like that and he said not. But this is an important point. Even if you don't name anything something_required, if a remote request sends that, it will trigger the error. So to be clear, I can force that error on your server right now by just writing my own form. It isn't a big deal for sure, but it is something to remember. Here is where things got weird though. In his error handler he was dumping out the form and it was empty! I noticed his code looked like so:

So - at this point - I was still pretty lost. I asked him to add this to his error handler:

This then revealed form data within the content of the request. I then realized the issue. ColdFusion wasn't populating form.fieldnames. If he had just dumped the form scope itself it would have worked. So for some reason, when a form validation error occurs, form.fieldnames will not exist. Confused yet? Let's look at a complete example. First, my Application.cfc.

Next - this is the file being hit by the remote server.

Right now it just echos back data. And finally, here is my tester:

Notice the form field is just stuff. Ok, so here is the result of a good post. 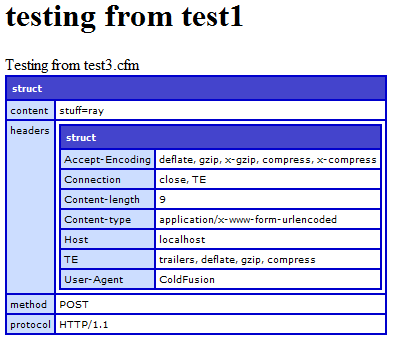 And now - let's break it. Here is my new tester:

As you can see - I just renamed the field to include something to trip up ColdFusion's validation. 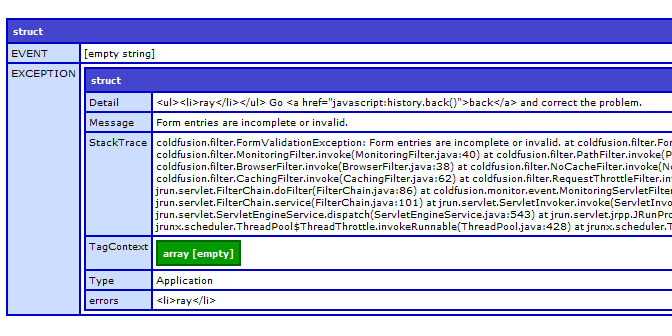 As you can see - even this is a bit confusing. Why is my form value in there? No idea. So what to do?

First off - in ColdFusion 9 you can fix this in two seconds:

I see no reason to never use this line of code - unless you actually are using that old feature and if so... um... stop. Now unfortunately the user was still on ColdFusion 8. Luckily you can just look at the exception and not email if it happens. Here is an example.

Since the remote site wasn't doing anything valid on the server anyway, this is probably a fine response. (Although I'd also consider noting the IP and blocking it at the network level.)

Anyway - I hope this helps others!

Interesting... I never have, not never wil use CF's form auto anythings, but none the less, this is interesting, good find.

And that's kind of the point - he wasn't using it either - but it definitely reared it's ugly head.

@Ray - interesting - so to confirm in CF9 the application serversideFormValidation setting affects all forms?

The CF9 docs say cfform specifically - "If no, disables validation on cfform fields when the form is submitted"

I think it would be better written as -

If form data is sent to your server (who cares if it is from your server or some remote POST) then validation will be ignored.

Came across this page from a Google search on "coldfusion server error form entries are incomplete or invalid". When I saw your reference to "_required" I immediately knew that was my problem!

While I didn't read passed the second paragraph, I'm sure the rest of the article was great too ;-) Thanks!

You wouldn't be the first tech person to skim. ;)

Thank you Ray!! Had a field XXX_DATE that was tripping the error. I saw it and was like, what is this? I added this.serverSideFormValidation = false; to my cfc and I'm a happy coder!

Hi Raymond, I have a similar issue with form field named with xxx_Required which triggers the alert on form submission. I am using HTML form instead of CFForm. I set this.serverSideFormValidation to 'false' in my save function in component, but the alert still occurs. I am using CF 2018.