The title says it all. You can now download ColdFusion 901 here. Release notes may be read here. A detailed list of new features may be found here (PDF). This is not some small "point" release. In fact, I'm rather surprised by how much Adobe managed to sneak into this without calling it a 9.5 release. Over the next week I'll be discussing 901 in detail, but at a high level, here are some of the updates 901 adds, for free, to your ColdFusion 9 install. (Note - if any of the links don't work - give it a minute.)

So what about CFBuilder? You may not realize this - but the last point update actually updated your library to add support for 901. If you type in cfquery, then dbtype, the hint will show both query and hql. This support isn't quite 100% though (ormoptions doesn't show up as an argument for cfquery). If you find anything missing, please log a bug report (as I did for the previous) at the CFBuilder bug tracker.

As I said, I'm going to be blogging about 901 updates over the next few weeks. I'll be using the prefix "CF901" before these entries in case they begin to annoy the heck out of you. I'll also be updating this server to 901 tonight so if you see any momentary downtime, blame Apple. (Yes, that didn't make sense. Deal with it. :) 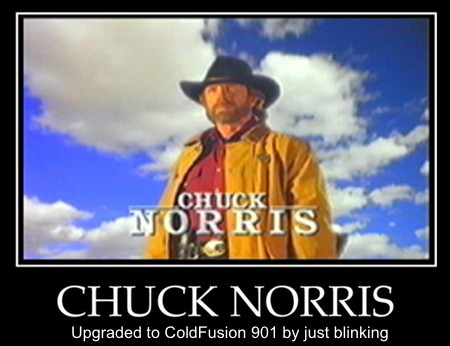