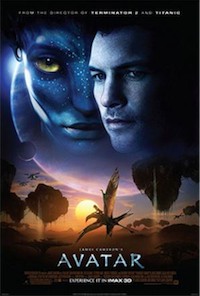 I just got back from seeing Avatar, the latest film from James Cameron. I won't call this a review - just a smattering of thoughts - but I'd love to hear what others thought. Let's keep it spoiler free though. Overall, I thought it was a good film, a strong film, but not quite great. It tried real hard, but in the end, the story was lacking enough for me to keep it from being great.

Technologically, the film is perfect. Seriously - this film has set the bar for special effects, and probably will be the film by which others are judged. The Na'vi looked realistic enough for to be 100% believable. You didn't have any of the "Dead on the Inside" type feeling you get from other movies with computer generated characters (I'm looking at you, Polar Express).

The 3D was also well done. You had none of the "in your eye" type shots to remind you of the 3D, and in fact, except for a few scenes, I pretty much forgot that there was any 3D at all. There was one scene with insects though that - I swear - almost made me raise my hand to bat them away. This is how 3D should be done.

So from a special effects angle, the movie gets an A+. Shoot, higher than that. I really think it was perfect in that regards. It's the story that... I don't know. It just didn't rock my world. It wasn't a bad story. Not at all. In fact, when I realized that the movie had lasted over two hours I was truly surprised. The movie never dragged or got boring. Some of the mysticism did get a bit corny at times, but I could live with that. No - what I didn't like was how... simple the story was. It seems like something we've seen many times before. Big bad corporation, evil military forces, face off against a technologically inferior but more spiritually aware native force. It just felt... easy. Too simple. I mean, there was one offhand remark by Jake (the main character) where he mentions that there is no more green on Earth, that it is dead. If the corporation were mining something that Earthlings desperately needed to survive as a race, well, at least we'd have some complexity, some deepness to the story.

I did enjoy the story. Really. And I can see buying it (I bet it will be stellar in Blu-Ray), but I wish that some of the subtlety and innovation that was brought to the special effects had been put to work to the story as well.

Ok, so that's my non-review. One last note. I love ship and vehicle design in Sci-Fi movies. The first shot of the film - the long range ship that beings Jake to Pandora, was incredible. It had a classic 60s feel to the design. Very unique.

Oh, and one last last note. Did folks catch the anti-Bush/anti-Iraq war one-liner in there? Ugh. While I may agree with the politics, it had the subtlety of a brick to the side of that head.

Hollywood really needs to get away from attacking evil capitalism, especially when it's capitalism that gives people $$$ to buy all those movie tickets thus creating profits to recoup the cost of making these movies . . .

I want to add an additional comment: One thing that is done very well story wise - is how happy Jake is with his Avatar. The excitement, the joy, the pure happiness of just being able to walk - is conveyed very well by the actor. What makes this even better is that these scenes are with a CGI character.

Has James Cameron ever been good at subtlety?

I found I never had to make excuses for the movie because it was done with a lot of CGI. It was just an entertaining movie with beautiful visuals, good action sequences, and an interesting, if not a little familiar story. This movie really set a new standard for seamless integration of CGI and live action. I must say I am really enjoying the new use of 3D in today's films. The use of 3D to bring an added depth to the film and the avoidance of the typical 'in your face' 3D shots of the past is welcomed addition to movies.

There were many scenes in the movie that looked like they had been intentionally toned down. To make it more children friendly I suppose. The movie seemed as though it was trying to find a middle ground between the intended adult and kid audiences, and I don't think it quite hit it.

I still holding out hope for the the directors cut.

Ray, as you said the movie was visually stunning. But apart from that, I felt they could have added more Depth to the characters and to the Na'vi. I also think the movie could have been shorter. I get why they wanted to use Jake's character, but I was not a fan of his narration.

I also found it to sort of the the retelling of a "Natives vs Colonists" story.

I agree with the non-review. Here's the one liner that seems to explain the story best of all, "Dances With Aliens".

But all in all, great movie.

It was the most immersive movie experience I've ever had. I went to the 10:40 PM showing and I had a hard time "turning off" my brain to go to sleep. It was visually awesome! I wish that the first 15 minutes of the story would have lasted 30 minutes.

I missed the "Bush-Bash"... good reason to go back and see it again.

Taking a risk to sound pathetic, but those synthetic, full of emotions, big eyes of Neytiri hit me the most.
Next, is Cameron's art of craft, and his ability to create a spectacle from nothing. Story, characters, environment...everything there is deja vu, but still presented in form that is not boring.

All in all, excellent movie.

Same as Tyler I was left with a "this is a Dances with the Wolves meets Alien meets Finding Nemo inside the Hollywood CGI factory" taste :)
But as far as entertainment goes this is moving pictures storytelling craftsmanship at it's best and it's worth every penny!

I missed the Political Jab - bummer :) As a parent of younger children I was glad they kept out the gore that really doesn't need to be there. I was appreciative that a huge arrow going through someone was just that - a huge arrow. Not some bloody, guts all over the camera horror show. As a person who thinks it takes way to much to entertain people these days I was happy to be entertained with a fairly clean movie for a change. I am sick of the assumption that we need blatant sex, the gouging of internal organs, and vulgarity in order to enjoy ourselves. I thoroughly enjoyed the movie and the two and half hours felt like 45 minutes. I hope the rest of the trilogy is as good when it happens.

I knew I had seen Avatar before: Ferngully
http://www.youtube.com/watc...

Overall, I enjoyed the movie a lot. I was entertained, the CGI was good, the characters were portrayed well and it had a descent story line. I will definitely buy this movie on Blu-ray.

I'll ditto Chris - I don't think it needed any gore. It was realistic enough.

@Eric: I'd say yes. Violence was on par with Star Wars (lots of shooting, explosions, implied death, but no real gore), and the one love scene was well done, quick, etc.

I give Avatar a strong 9 out of 10 overall. Special effects A++. I totally agree with Rey. The difference between a 9 and 10 movie is very subtle. A great movie (a 9 scale movie) will take you on an awesome journey. In an awesome movie (10 scale movie) there's something that sticks with you long after the movie is over. A would be Forest Gump, It's A Wonderful Life. Agree?

Were you referring to the Shock and Awe comment?

No, it was the line about the pre-emptive strike. Such a blatant comment on Iraq (and again, NOT to bring politics to the post, I agreed with the sentiment, it just seemed too obvious).

Sorry - although it looks FUBAR, the link above does work.

Being an avid Sci-Fi geek for over 50 years I personally thought that Avatar was an astounding movie visually, of course the story is based tightly on Pocohontas and the first American settlers and the Navi are very similar to the native American Indians, but who cares! every film producer or director will use the same story or story line, over and over again, an example of this is Star Wars which contains every cliche available, but it is still the best movie ever made.