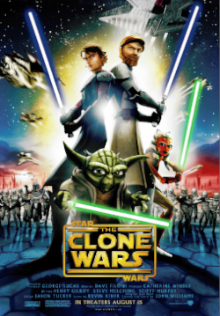 Yesterday I took my three kids to see the new Clone Wars movie. I knew it was coming to TV eventually, but I couldn't pass up the chance to see more Star Wars on the big screen. My boys are pretty big Star Wars fans themselves (gee, I wonder where they get that from) and my daughter, well, she loves her daddy so that was enough for her. The title of this blog entry is a bit of a joke. I am not one of those Star Wars fan who hate Lucas or thinks he is raping the franchise. I do think some parts of the prequels suck. But at the same time - I don't see Jar Jar being any more worse than the Ewoks. (Although we do get to see an Ewok die though...) I read quite a few negative reviews of the movie, but I went with an open mind and figured - at worse - my boys would absolutely love it.

Turns out the movie really doesn't suck! I had been extremely pleased, surprised even, by the first Clone Wars series that came out a year or so ago. Some of the scenes in that series were easily as cool as any of the stuff in the both the prequel and classic series. (Especially the giant foot ship!) In my mind, this new series is even better. The pacing is a lot more intense, and I felt that the story comes off better then the first series. (To be honest though, seeing everything at once does tend to reinforce the storyline more than seeing a series by watching a few minutes at a time.) I found it kind of cool to see the Jedi bending over backwards to help Jabba. It was also nice to get a bit more detail about the war in general. I think this movie opens the door to a lot more material in the period.

The animation style is... well interesting. It's definitely different from the first series, and it's a bit artsy, but I thought it was ok. The only character design I didn't care for was Dooku. I just couldn't take my eyes off his super deformed nose. On the flip side, Ventress was awesome. Easily as cool as Darth Maul, she is a welcome addition to the Universe and I hope we can see more of her.

If there was one thing I really didn't care for - it was the Mardi Gras Hutt. I don't remember his real name, but if you see the movie you will know what I'm talking about. His part in the story - fine. But his voice, design, etc, just annoyed the heck out of me.

Don't take this the wrong way, Ray, but I'm not sure your readership can credibly accept you as an "objective" source when it comes to judging something related to Star Wars ;)

zero the hutt I believe. "sky guy" and "artooie" were dumb, and every time she would say those I would cringe, but other than those I thought it was good too.

I totally agree with you ray.I loved clone wars, i had no expectations when i went into seeing the movie. when i sat down there were only 5 people watching it with me, and all 5 of them looked above the age of 40. Anyways The movie started and the action was amazing. Great animation, good script and a great way to begin the series!.

@rob - Consider this. Yes, the girl was a bit dumb, and a very stereotypical 'kid sidekick'. But do not forget that in a few years, Anakin goes evil and slays this same girl he grew fond of.

@Ray - I also enjoyed the movie, as did my kids. One thing I think a lot of Star Wars 'fans' neglect to acknowledge is that Star Wars has always been geared more towards kids.

Besids, even if Lucas is 'raping the francise', its his franchise.

My 6 year old son thoroughly enjoyed it too. I enjoyed it too. One thing that bugged me was Anakin having a padowan in the first place. Was he ever officially a jedi? Yoda was always suspicious of Anakin and I can't see him assigning him an apprentice.

@Matt - I believe he became Jedi during AotC. In a council meeting.

That is a good point Ray :)

You know, I have to disagree. I thought the animation was cool and well done, but the story was completely lame. The "acting" was horrible.

What drives me nuts most is the lack of skill in storytelling. Combat robots that are ultra-stupid. One looks over an edge and falls over to it's destruction? Ugh...

I will admit that my friends 8 year old I went with liked it. But then, I LOVED the first Star Wars movies when I was young and they had a somewhat more sophisticated story. Uh, compared to this movie it is like Barney vs Hamlet.

First off, my son absolutely loved it. I was a little dissappointed by the episodal nature of the whole story. One thing I love about Star Wars is its epic nature. This was much more of a day in the life of the Clone Wars. Interesting -but not a major motion picture.

The animation style, as well, seemed much less epic (compared to Akira or other Japanese big scale manga films).

Though, one of the kids I was with (my son's friend) found the animation and music scarier than the live action films. I guess the style really is geared to kids.