So I have an admission to make. I've been playing fighting games for about as long as I can remember, but I've always been more of a button masher than anything else. I may learn a move or two, but I generally just like to run into a fight and win by going crazy. That's what I call tactics. If a game allows that, then I'm happy. Soulcalibur IV was my first introduction to the series so I can't compare to any of the previous incarnations. It's also only the second fighting game on the 360 I've played. (I've got a copy of Dead or Alive as well.) So what did I think?Right out the bat, the game is a bit overwhelming. I figured on a story mode and an arcade mode, but there was quite a bit more. I went right in the story mode, picked a chick (I always play the girls in fighting games - ever since I found I could kick butt with Chun Li in Street Fighter), ignored the somewhat lame text and began fighting. Without reading a word in the manual I was able to figure out the basics and actually win a few fights. The story mode mixes things up a bit with multiple opponents per level, which is cool. I also like the sword play, which I haven't really seen since Dark Rift on the N64. Not all the fighters have swords of course, some have staffs but the weapon combat works great and is really enjoyable (especially with some of the longer range weapons).

The arcade mode has a series of 8 battles, each getting progressively more difficult as you advance. I haven't actually been able to beat the arcade mode yet, mainly because I keep getting my butt kicked by the Dark Apprentice. (More on the Star Wars marketing later.)

There is a character creation/edit mode that seems pretty deep. You can either start a character from scratch (gender, fighting style etc) or work with one of the main characters. This goes way deep and I was surprised the docs (yeah, I did actually read them after a few hours of play) didn't seem to cover the entire process. So for example, along with picking equipment (which are both cosmetic and possibly stat boosting), there is a skills system that can change how your character plays. The skills system seems to have a concept of points where you have to balance the skills against a limit that goes up when you get a 'style' advance for your character. Like I said, the docs only give partial coverage to this feature, so I'm still a bit lost as to how the process works exactly. I guess if you really, really want to get deep into the game, this would be worth the time, but I can't see doing that. 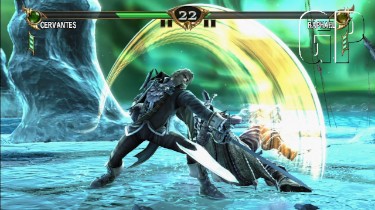 The graphics are good, and are the level designs, but I was hoping for a few more levels than what I got. (I'd guess around 8 or so.) I will give credit to the game for making the levels have unique aspects. One level has a row of advancing knights that slowly shrinks the available playing space. Also most levels have a drop off or cliff that you can push an opponent off. That adds an edge to the fight as you have to be careful to not get too close to the edge - or do what I do often - push an opponent to the edge, than accidentally switch places.

One of the main reasons I was excited about this game was the Star Wars influence. It's pretty funny how they shoe-horned Yoda into the main story line, but ignoring that, it works ok. Yoda is a great fighter (as we all saw in Attack of the Clones) if you ignore the fact that a light saber would typically end a fight in about two seconds. I was surprised to also see the Dark Apprentice in the game as well. It feels a bit forced (pun intended). It's almost like Soulcalibur acts as an ad for The Force Unleashed. (Speaking of ads, there is also a coupon for fried chicken in each copy of the game. In case you want to put some weight on while sitting in front of the TV.) It all kinda comes off like underhanded marketing, but since it's Star Wars, I'll ignore it. (And in a game with music/sound that is mostly forgettable, I have to say I love fighting to the "Duel of the Fates" song.)

So is it worth picking up? I think so. As I said, my only other fighter for the platform was Dead or Alive, and Soulcalibur definitely beats that. (But to be fair, DOA came out close to two years ago I think.) I'd be curious to hear from folks who have played earlier incarnations of the game and can speak to how the game compares.

Soul Calibur is in my opinion the greatest fighting game series. I have played every incarnation except SC3. The manual is to light for all the new things they added. The character creation is somewhat self explanatory but there are some things that just require too much trial and error before you understand them.

As far as levels, keep playing. There is a lot of content to unlock: more levels, hundreds (at least) of pieces of equipment, and many playable characters.

Yoda is cool but The Apprentice is awesome. He is a bit unfair, and the AI plays him really well.

The thing I love about SC the most is that you can move on from button mashing to learning how to use characters very quickly. Every move is intuitive, and near every d-pad/button combination is a different move.

Tower of lost souls is where all the skill and character creation comes into play. It gets really hard and some times the equiptment is really hard to get.

Here is a useful guide to unlock characters and get tower treasures.
http://www.videogamesblogge...

To beat the apprentice I just kept using the grab. I was able to do this repeatedly and he seemed somewhat unable to stop it (I don't remember who I was playing though I recall it was not Yoda). Once you have him, he is a great character to play.

If you are interested the original Sould Calibur is available as an XBLA title and is quite good as far as XBLA games go.

I've been playing SC since it was available on Dreamcast and it was a pretty inventive game even back then.

On a separate note, if you're into fighting games be sure to check out the new Mortal Kombat when it comes out. It's MK vs. DC Comics and features Superman, Joker, Batman and the Flash among others.

Ray at our next meeting we will do a presentation of me kicking your ass in Soul Calibur.

I haven't played in a while, but I did thoroughly enjoy COD4. I believe I reviewed it a few months back. It is a contender for game of the year - with Bioshock just _barely_ above it.

My gamer tag is cfjedimaster, but I have to say, I don't do online much with the XBox. I either play WoW online, or I'll do an XBox game, but typically just solo. (Playing Overlord now.)

I really didn't dig this title and since someone mentioned CoD4. Feel free to hit me up for a game. I play that a lot and have a great group of guys that are mature (OMG) and skilled. I however and neither. lol