Ok, maybe not ever, but interesting nonetheless. A few days ago a reader pinged me to ask about gauge charts. Those are charts that act like speedometers. I knew it wasn't supported by ColdFusion out of the box, but I recommended he take a look at the WebCharts design tool that ships with ColdFusion. When I did so - I saw right off the bat that it was supported, and there were quite a few of them.

I generated my style xml, passed it to the CFCHART, and promptly got an error about gauge charts not being supported. Darn. I was as frustrated as Britney Spears in a library.

Yesterday the topic of CFCHART came up again, this time on the CFAUSSIE mail list. When I made the same point there, a user named Simon Haddan shared an interesting fact. You can actually use Java to speak directly to the WebCharts engine embedded in ColdFusion. (Christopher Wigginton blogged on this as well back in 2005.)

Essentially, you can use the WebChart's designed to create a WCP file, which is just an XML file. You can then grab the relevant bits out and speak directly to WebCharts. And guess what?

Not as far as I can tell. I made this lovely PNG gauge below. (And yes, SWF is supported too.) 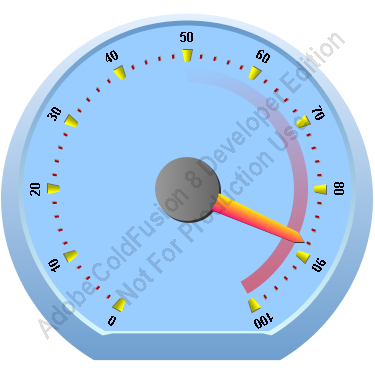 The code is a bit complex, and involves some string manipulation, but could be made easier if someone felt like creating a nice CFC for it. Here is the code, and remember credit goes to Simon and Christopher:

The first part of the file grabs the style portion from the WCP file. I believe this is the same XML you would normally grab from the style tab. The chartModel section is the data. For a gauge it is rather simple - one value. I'm not sure where "Sample 0:" is even used, but the value, 88, is.

Next up we do the Java magic. Note the getImageTag portion expects a URL. This URL represents the same "magic" URL ColdFusion uses to display images/SWF stuff. You probably wouldn't want to hard code an IP like I did. WebCharts also wants to add /Images to this so it has to be stripped out.

The last thing I do is output the HTML in a form I can read, and as is, which works just fine.

Pretty cool, eh? In theory, one could build a custom tag that lets you paste in a MCP and it would run form that, but the data would be hard coded.