One of the most surprising things about the XBox 360 console is not the "big" games, but the fun little games you can play via XBLA (XBox Live Arcade). These games typically run from 5-10 dollars and are simple games. They may not have the graphics of Call of Duty or the depth of Bioshock, but they can be quite good for the price. About a month or so I finally listened to a friend who told me to check out Puzzle Quest: Challenge of the Warlords. I knew it was a puzzle game, but it was also - get this - a RPG. Now frankly - I like RPGs quite a bit, and I like puzzle games a bit, but I thought this would mix like beer and oatmeal. Turns out the game is great and easily one of the best purchases I've made on XBLA. 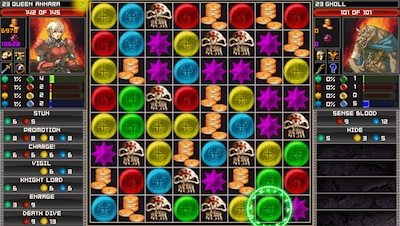 So how exactly do you mix a RPG and a puzzle game? The basic idea of the game is that each battle is done via a puzzle. The puzzle is simple - mix 3 or more of the same color gem. But the RPG aspect kicks in when you are look at what matching gems get you. Some gems given you a form of mana (magic points) which are distributed among four different types. Some gems give you gold or experience, and some gems do direct attacks on your enemy.

You have a few basic character classes, including your typical fighters and mages, and you can customize your name and picture. Your character also has multiple skills that affect your magic ability and fighting skills. You also have an inventory of weapons, armors, and magical jewelry you can add as well. 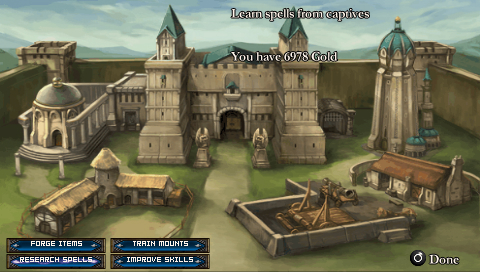 But wait - along with basic combat you also have a citadel (I called it my crib) that you can customize. You can capture enemies and learn spells or train them as mounts (my sexy female knight spent the game riding a giant rat). You can even craft new magical items. Oh - and you can even lay siege to cities. Once a city is captured, it will give you money once a month.

And oh yeah - there was a plot to the game as well. Something about killing some big undead dude. I'm not intentionally trying to downplay the plot. It was ok. But frankly, I just enjoyed playing the game and increasing my character stats. In ways it reminded me of Diablo. Diablo had a plot - but really it was just a fun RPG to play.

Anyway - check the game out. You can download a demo for free and the game even includes multiplayer. By the way, the screen shots below are from the PSP version. My source for screen shots didn't have any from the XBLA version which is definitely better than the ones you see here. 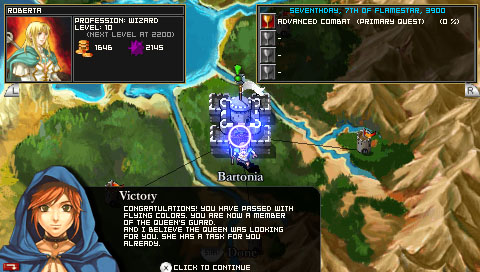 UNO was the best $5 purchase I've made on xbox heh. I'll have to check this one out.

I have to agree, after being through 3 Xbox 360's (RRoD), I still find myself playing XBLA games. Puzzle Quest is great and just yesterday I downloaded a classic, Tempest. I played that as much as the Call of Duty 4(PS3) that was under my tree.

Puzzle Quest is a great game. I had it for my PSP but I bought the Xbox version because there are some game crippling bugs that aren't being fixed in the PSP version.

My buddy had downloaded this on his Xbox and completely addicted my girlfriend. Same with Settlers of Catan. PQ is available on most of the consoles and easy enough to find, but the PC version is impossible to get ahold of. The PC version has most of its files in XML so people have been modding the game like crazy, creating thier own classes. Love this game.