I've long wished for a screen saver that would recreate that awesome scene towards the end of War Games where WOPR (the intelligent computer trying to start World War 3) runs a crap load of nuclear war simulations. I figured something that simple should have been created. I would have loved to - but my design skills aren't enough to do something like that.

So imagine my surprise when I discovered DEFCON by Ambrosia Software. This is a Mac game that is heavily based on that scene from War Games. You start off placing ICBMs, radars, air bases, and naval units. Then you start kicking butt. By the time the nukes fly, the game is quite intense as you have to manage your entire war effort. The game has a pretty intensive online multiplayer component as well.

Luckily for lazy people like me - there is a an automated computer-only version. You can start the game up and sit back while million of people die in a bright white, pure flash. (Yes, I'm a nuke nut.) 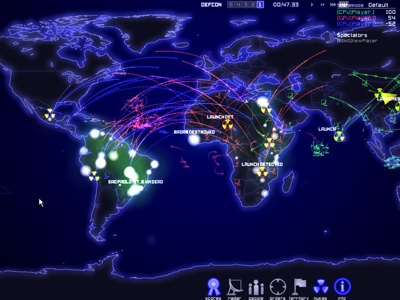 Oh, and there is a Windows version as well. The prices for both are pretty reasonable. 25 bucks for the Mac version and 19.50 for the Windows one.

And yeah DEFCON is a fun game, haven't yet beaten the computer, but only played I think three times so far.

There's a free version too, that's has enough of the features to make it fun.

Slight clarification -- DEFCON was written by Introversion, the same people that brought us Darwinia and Uplink:

All of the Introversion titles are available for Mac, PC, and Linux. I've spent far too many hours in Uplink ...