It isn't Sunday but here are two video game reviews for you. Next will be Fallout 4 which should be at home within the week.

I wasn't planning on getting Destiny because every time I've picked up a MMORPG I end up not playing and then feeling guilty when I pay for a month's usage that I didn't - well - use. There's no monthly fee for Destiny though and after seeing reviews of the Taken King DLC praising it for incredibly improving the game experience, I thought I'd check it out.

Destiny is a shooter with RPG elements. You've got 3 classes with 3 subclasses each. You've got equipment that adapts to different play styles and levels up as well. To be honest, it is more shooter than RPG, but that's fine with me. Unlike a typical Call of Duty game where your character doesn't change throughout the story, you really get a good feeling of progression as you go through the game.

The story is - unfortunately - a hot mess. There's actually a good story about how the game's story got so messy (The Messy, True Story Behind The Making Of Destiny), but to be honest, it didn't really bug me too much. As I went through the various chapters, I figured out pretty early on that things weren't going to make sense and I just went with it. There's a wealth of online material in a 'codex' that I could make time to read if I cared, but frankly I didn't want to be bothered. You've got - basically - a space opera with all kinds of weird names thrown at you with loads of depth that ends up making no sense because there's never any context given to what you're being told. It is a huge failure imo, but a testament to the game that I still enjoyed the heck out of it.

The game is also a bit confusing if you've never played a MMORPG before. The idea of a central hub where you can get quests and deal with factions and earning reputation and all that made sense to me, but if you've never seen these things before you're going to be pretty confused. Maybe Destiny can't "fix" the story problems, but I think they could do more to make some of the 'mechanics' of the game itself more familiar to players.

Another issue with the game is that because it is online only, there is no real concept of pause. Now - to be fair - this is true of all MMORPGs. But at least in Warcraft I could hop on a winged mount, lift myself above the ground, and essentially be untouchable while I take care of something. You can find quiet places in Destiny during a mission, but for the most part, once you start something you have to assume 20-40 minutes of play without the ability to pause.

As I said though, the game play is incredibly fun. It takes the shooter genre and really makes it much more interesting. Some of the battles were amazing. On more than one occasion you have to solve a minor puzzle in terms of how in the heck you're supposed to harm the boss. All while the boss is raining death upon you at the same time. These fights were some of the best I've seen in shooters. Ever.

I've finished the main story and am now in what would be called the "end game" content. Things here get a bit slower and the difficulty jumps a bit all of a sudden. I'm not quite as excited about the game now as it feels like you get a bit less reward per game session, but I'm definitely going to keep at it for a while longer.

The only aspect I really didn't care for is PVP. Maybe I didn't dedicate enough time to it but every match I was in was an exercise in frustration. I did win a few matches, but never scored well.

The game has a cool mobile app companion as well as a web-based profile. Here's my character - not the prettiest one in the world but she's mine.

And now for something completely different... Star Wars Battlefront is another online only (well, mostly) game focused on PVP. Unlike Destiny, there's no story. The entire game is literally various different types of PVP matches with some training and 'fend off waves of attacks' solo play as well. (It feels like I'm dismissing the offline/solo matches. They are fun. They just aren't really the meat of the game.) But since most of us know the Star Wars story by heart, it isn't something that bothers me. What makes me happiest of all is that the setting is entirely within the original series. While I certainly do not hate the Prequels, it seems like it has been a long time since we've had a good game in that setting.

Game play is pretty vanilla for a shooter. Probably the biggest difference is the lack of ammo. Since your weapons are all energy based (except for rockets and grenades), you instead have to worry about overheating your gun. Another interesting aspect is the use of hero classes in some matches. Playing as Darth Vader or Luke is pretty cool and while powerful, the hero classes can be taken down with effort.

Of course, you've got an entire mode based in space ships as well. (Well, they are 'space' ships but all matches are in atmosphere.) I enjoy the matches, but not as much as playing a trooper. One kind of weird issue with the vehicle matches is that you spawn well outside the main fighting and it can take up to 30 seconds to get to the fight.

There's quite a few people complaining about how "shallow" the game is. Honestly, I don't quite see it. There's eight different PVP style matches and <a href"http://starwars.ea.com/starwars/battlefront/features/missions">four different solo/local style matches. For basic PVP, you use 12 different maps that feel very different in terms of how they impact game play. I've spent most of my time in one PVP game, Blast, and frankly it doesn't feel too shallow to me. Maybe you could make the argument that a game that skipped a single player story could have done a bit more, but I'm satisfied.

If I had one complaint, it would be that leveling up seems like it doesn't quite give you the rewards you expect based on the amount of time you spend. They really need to do a bit more here to reward you for the time you spend. There's fifty different levels and I'm not sure if I'll have the time to actually hit the max level before my kids graduate. I'm comparing this to what I remember of the progression in Call of Duty and it definitely feels like Battlefront will need a heck of a lot more time to max out. You know what - the biggest thing I miss is ranks. Sergeant, Lieutenant, etc. I wish the game would add that. I know it sounds silly - but

I'm currently level 21 with a bit over 13 hours play time. As you level up, the amount of experience required to gain a new level goes up, but the amount of experience you get from a game doesn't really grow as much. Obviously better players will get more points, but there's really a somewhat firm limit to how much you can reasonable expect. I really like this game so far, but the idea of hitting 50 seems like it may be too much of a commitment.

On the flip side of all that complaining, I'm having a heck of a lot of fun. In general, I come in about the top half of my team and sometimes I even win some times. It was rare for me to do that well in Call of Duty. Another interesting aspect - according to my detailed stats I've only won about 38% of the time. That surprised me because it felt like I was winning more. I think that's a good sign. Even when I'm losing I'm still having fun, and that's what matters, right?

Of course, you can't talk about this game without mentioning the graphics and sound. They are perfect. Seriously. Probably the best I've ever seen in a video game and really go a long way towards capturing the spirit of Star Wars. Hell, even the menus are beautiful too.

So as I said - it is a fun game. Really fun. It has room to grow and I really hope they adjust level advancement, but I'm having a great time playing it. Probably the most I've had in a multiplayer environment.

Like Destiny, there is a companion site and mobile app for Battlefront, but the companion app also has a completely new game too - a simple turn based combat game. It isn't incredible, but it's free and gives you a few bonuses to your main game as well. 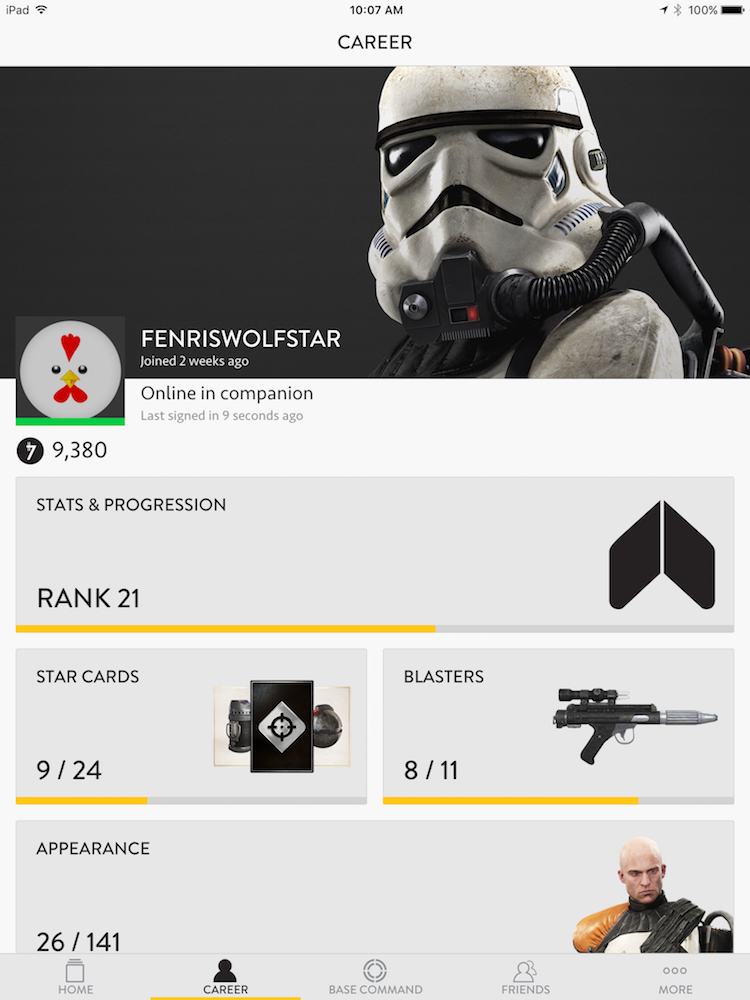 Any way - that's it for now. If you are playing either of these games, let me know in the comments below. As a reminder, if you click on the product links I get a small kick back when you purchase at Amazon. Thank you!